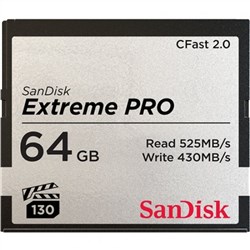 *Shipping Insurance applicable. Cost will be calculated on checkout step 3, before any buyer commitment is made.

Or use LiveChat (bottom right)

CFast cards are not physically or electrically compatible with CompactFlash cards
check your device Sandisk compatibility here http://pct1.sandisk.com/NewSearch.aspx
We only source Sandisk from official Sandisk website published distributors. Each card is in full factory sealed retail packaging, with hologram security sticker of the distributor to ensure authenticity and quality. Do not go for lower priced offering unless it also has official distributor seals.

What's Included:
Sandisk Extreme Pro 64GB CFast 2.0 525mb/sec Compact Flash Card
Features:
SATA III 6 Gb/s Bus
Max Read Speed: 525 MB/s
Max Write Speed: 450 MB/s
Min Write Speed: 130 MB/s (VPG-130)
Records DCI 4K (4096 x 2160)
Tested Under Extreme Temperatures
A NEW LEVEL OF PERFORMANCE FOR CAMERAS AND CAMCORDERS
The SanDisk Extreme PRO® CFast 2.0 memory card delivers the high performance that broadcast, cinema, and photography professionals demand today. The card has the speed, capacity and performance needed to record cinema-quality 4K video (4096x2160p)1. It delivers write speeds of up to 450MB/s* and data transfer speeds, up to 525MB/s*. With a video performance guarantee of 130MB/s (VPG 130)4 and 128GB to 256GB** of storage capacity, this is a great memory card for professional cameras and camcorders.
DESIGNED FOR PROFESSIONAL VIDEOGRAPHERS
Professional videographers trust SanDisk CFast cards to keep up with the high demands of the film industry. Get the most out of your professional camera with the high performance, capacity, and reliability of a SanDisk card.
EXTREME SPEEDS OF UP TO 525MB/S READ AND 450MB/S WRITE*
With write speeds of up to 450MB/s*, the card lets you capture multiple frames per second, making it an ideal choice for fast-action or continuous burst mode photography. The card offers read speeds of up to 525MB/s* so you can transfer large files from the card to your computer lightning fast.
VPG-130 FOR CINEMA-QUALITY 4K VIDEO4
With Video Performance Guarantee-130 (VPG-130)4, the SanDisk Extreme PRO CFast Card lets you capture uninterrupted cinema-quality 4K video1. VPG-130 guarantees a minimum sustained write speed of 130MB/s4 to keep up with the latest professional video cameras.
TESTED UNDER EXTREME CONDITIONS
This memory card can operate in temperatures ranging from -4 F to 158 F (-20 C to 70 C).
EASY FILE RECOVERY WITH RESCUEPRO DELUXE SOFTWARE
The card comes with a RescuePRO Deluxe data recovery software download offer3. This software makes it easy to recover files that have been accidentally deleted.
Specifications:
https://www.sandisk.com/home/memory-cards/cfast/extremepro-cfast-2d

SSL secured & Safe Payment
CCCWarehouse.com.au uses latest 256 bit encryption technology to protect customer's information. We adopt the latest privacy policy to ensure your privacy is secure. Most importantly we use PayPal payments which offers all buyers with up to $20,000 protection; Visa, MasterCard are also welcome.

Delivery & Warranty
Faster despatch that our competitors. Most products on CCCWarehouse.com.au are ready to ship, we use world class courier services DHL, Fedex as well as AU Post to get your purchases to you fast! We take full responsible for any customs duty and we will help Australian customers with any customs/GST issues. All purchases come with 14 Days No Questions Asked Change Minds, Plus full Australian warranties.

Live Support & Prompt Customer Service
With over 20 years of retail experience, you are in good hands. Not only everyone at CCCWarehouse.com.au is expert on Digital Cameras, Lenses and Mobiles, we aim for 100% customer satisfaction, we offer prompt professional service through - Live chat, 24 hours 7 days telephone message service. Professional service & experience is something most buyers overlook when shopping around, this is something that sets us apart from the rest!

For Business ›
Become a Supplier